No pseudonyms, no catchy phrases, Mark Matthews lets his sax speak for itself. Mark is a fresh face with a classic sound to the house scene, nurtured and raised by house legend Levi 5 Star. Jazz educated from the Sydney Conservatorium of Music, Mark implies through his playing that house music and jazz are inextricably linked.

Mark is a killer addition to any sound system, whether working with the vocal powerhouse of Michelle Martinez, the charm and versatility of Muma Megs, or the sultry sounds of Chloe West it makes for great
entertainment watching the musical interplay that develops. Mark has arguably worked with nearly every house DJ in Sydney and presents consistent contributions to La Fiesta Sound System, SHE Sound System (Dave 54) and Kitsch (DJ Phil Hudson), including special guest
appearances with Martini Club, and Whitesoul (DJ Mark Olsen). Other notable collaborations have seen the likes of Dante Rivera, Pascal Pouzet, Jack McCord, Liam Sampras, Paul Guy, Graham Cordery (SHE) and Wei Shen (Those Usual Suspects) 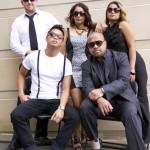