After completing her Bachelor of Music at the Australian Institute of Music 2008, Vocal Major, Briana has already begun to make her mark on the Sydney scene, performing around town with some of Sydney’s best musicians

Her potential as a young and growing artist is quickly being noticed in the Sydney scene, as described in a recent performance with the Jason Bruer Band at the Basement: 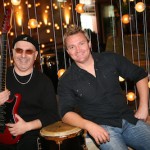